Lowering Your Cholesterol May Improve Your Sex Life

A new Rutgers study is giving hope to older men concerned about the effects of cholesterol-lowering medications on their sexual health.

The research, conducted at Rutgers Robert Wood Johnson Medical School, found that statin medication prescribed to lower cholesterol and decrease the chance of heart attack and stroke, also improves a man’s erectile function. The researchers reported their findings at the American College of Cardiology’s annual scientific session in Washington DC March 29 and in the April issue of The Journal of Sexual Medicine.

“Older men who have poor cardiovascular health, diabetes or metabolic syndrome often experience erectile dysfunction – and the prevalence of these diseases is expected to increase,” said John B. Kostis, professor of medicine, director of the Cardiovascular Institute at Rutgers Robert Wood Johnson Medical School and the study’s principal investigator. “Our research indicates that statins not only improve cardiovascular health and reduce the risk of stroke and heart attack, but also improve erectile function in the men included in our analysis.” 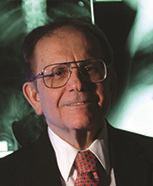 Kostis suggested that ED may serve as a warning sign of cardiovascular disease. In such patients, prescribing statins following the detection of cardiovascular disease could offer early benefits in addition to improved sexual function. The added benefit of statins on better erectile performance, he hopes, will encourage men to adhere to taking the medication as prescribed by their physician.

But until further research is conducted to determine the link between statin therapy and the improvement of erectile dysfunction, Kostis cautioned doctors against prescribing statins for erectile dysfunction alone or when it may be caused by psychosocial factors.

“Ultimately, a healthy lifestyle is the best method to prevent disease, including erectile dysfunction,” said Kostis. “But statin therapy has been proven to provide long-term benefits in reducing cardiovascular disease and the detrimental consequences associated with it. Offering statin therapy to improve erectile function may extend these benefits further.”


The study is based on an analysis of 11 randomized controlled research studies on erectile dysfunction and statins that all used the International Inventory of Erectile Function – a self-reporting evaluation of male sexual function considered the standard of measurement in clinical trials of ED. There was no relationship of the average age of trial participants and the degree of LDL cholesterol lowering of statin with the outcome of the analysis.